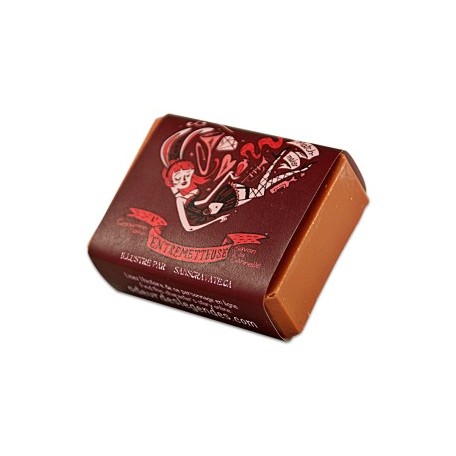 This soap from Savonnerie des Diligences carry you away with its sweet cinnamon scent!

Available in other scents

The Roaring Twenties in Montreal can be summed up in a few words: slave wages, booze, jazz, blues and loose morals. Bars, hotels and clubs proliferated and the brothels were turning people away at the doors.

I draw your attention to one such establishment owned by Lili Napoli, known as “Miss Lili”. This Italian beauty oozed sensuality. She would seductively bring her generous bosom to men’s faces, leaving them breathless with desire. With her endless slim legs, sultry eyes and svelte body, she would jump on any man rich enough to pay for a torrid night in her company.

Miss Lili toured the world, a bourgeois libertine collecting lovers in exotic locales. But one day, tired of the constant travelling and rich beyond her dreams, she decided to settle in Montreal. Given her second nature for facilitating affairs of the heart and carnal encounters, she opened a brothel in the middle of the Red Light District. It quickly became the preferred stop of business men looking for a discrete rendezvous.
But many were unaware that Miss Lili’s raging success was not only due to her matchmaking talents. During a trip to China, she had been introduced to the aphrodisiac properties of cinnamon. Knowing that the combination of this spice with pheromones paved the way for the sensual delights to come, she began putting cinnamon in every room of her house of ill repute. She also made a cinnamon water to spray between the sheets and drive men and women wild. Customers became addicted to its spicy odour and its effect on their libidos.

Lili Napoli was the queen of the Red Light District until Wall Street crashed in 1929, dragging the economies of the entire world into the Great Depression.  But Miss Lili would not be discouraged so easily. She moved to the country and began hand making cinnamon soaps. Distributed in every major North American city, her soaps all bore her unmistakable imprint: a heart.