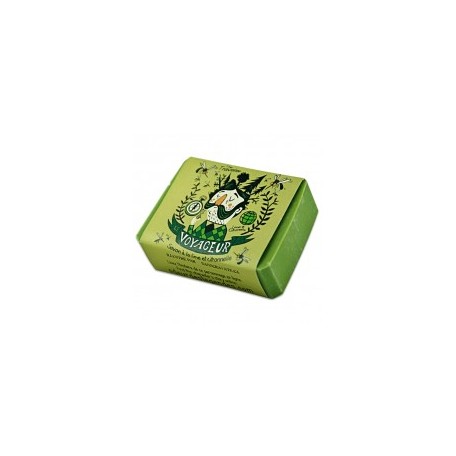 This soap Savonnerie des Diligences carry you away with its sweet scents of lemongrass and lime!
This soap is antibacterial and will be useful at home, or while traveling or outdoor activities (beaches, pools etc ...)

100g soap
Available in other scents

Once upon a time, there was a man whose sole passion was to live at one with nature. Whenever he could, he fled the city for the countryside. He slept under the stars, in a hammock or right on the ground. And his communing with nature would have been complete if it had not been for the thousands of insects that devoured him through the night. They were so ferocious that he was sure they hated him.

One particularly hot night as he contemplated the Pleiades at Mont-Mégantic, he found a change purse filled with ancient foreign coins: pesos, rubies, shillings, Louis d’or and many more. There was also a strange tarnished cross. As he polished it on his shirt, a spirit appeared – the spirit of a traveller. “Beyond hill and dale, brave man, name me the land where you wish to travel.” Caught off guard, he blurted out the first mosquito-free destination that came to mind: Alaska!

The moment his feet touched the frozen ground, he realized that the cold and wild animals were enemies just as awful as insects. He rubbed the cross again, this time choosing Egypt where he braved sand storms and bandits; in Papua New Guinea, he was almost eaten by a tribe of cannibals; in Madagascar, the clouds of grasshoppers made him miss his native Quebec; in Mexico, he could not get used to eating squirrel meat tortillas.

Though tempted by what he had heard of Asia, he curbed his travels after reading the list of recommended vaccinations for fear of the largest insects there. He began to dream of a land known for plants that repel mosquitoes. It was in Thailand where saw these plants being picked and processed for the first time. With conclusive experiments under his belt, he used the magic cross to return to Quebec.

He finally decided to settle on a parcel of land in Danville, in the Eastern Townships, and there he began distilling and processing evergreens. One night, as he fell asleep in his hammock, the traveller came to the realization that everything he needed for happiness could be found right at home!