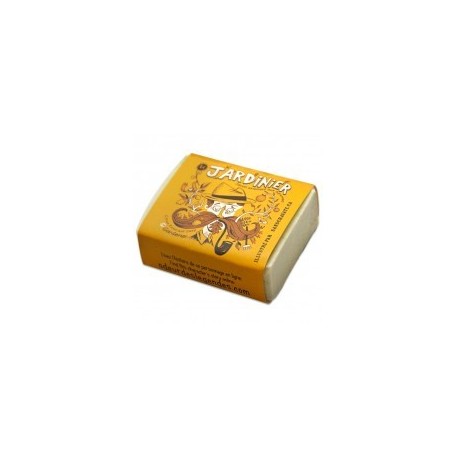 This soap with sweet citrus scents from Savonnerie des Diligences scent bath time!
Antibacterial, it exfoliates in depth and will make your hands gardener or cook clean and soft.

Kafka Roth was a Polish soldier who, during the Second World War, fled Poland for Abitibi, where he settled, convinced he had found peace. He had always loved gardening. His father, a doctor, and his mother, a healer, had instilled in him the unwavering conviction that lasting health comes from what you eat.

For many decades, the only truth he knew came from the medicine wheel that decorated and protected his garden and the pleasure he took each year in growing beautiful specimens of heirloom vegetables from unknown cultivars, some of which he had crossed himself. His enormous, juicy vegetables had exquisite flavour to satisfy the most discerning palates and were as highly prized as the most delicious candy. His neighbours came to admire his garden by moonlight. It was said that it was teeming with life all year round. Roth often found old keys, lamps, necklaces, rings and coins there. Had they been brought by grateful animals who fed on the fruits of his labour? Or was Roth’s life-giving garden somehow able to make objects appear out of thin air?