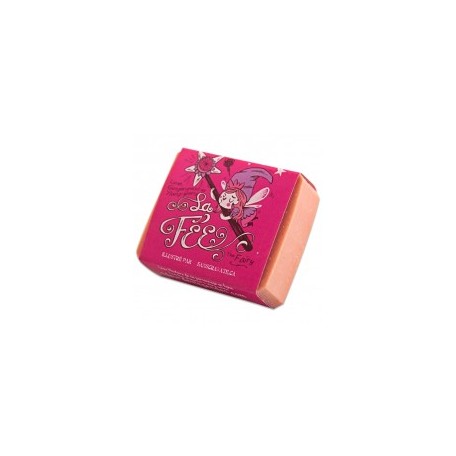 This soap from Savonnerie Diligences carry you away with its sweet lime scents Gingergrass and Ylang Ylang!

A delicate, soothing and mild soap, for girls only!

100g soap
Available in other scents

Long ago, in the land where fairies dwell, the Fairy Queen and the Elven King were married. That year, to plan and prepare the celebrations, many fairies set aside their usual work. Each fairy had their territory, and the little Fairy Mi, who was named for her very musical voice, took care of the most mountainous region in the east of the land. Along with her customary job of singing traditional good wishes for newborns, she was replacing the Tooth Fairy. Part of that job was to help the bees pollinate flowers to ensure fruit was always in good supply. It was well-known that any shortage would result in panic among the sweet-toothed population and lead them to use refined sugar. That would mean more lost more teeth and a ten-fold increase in the Tooth Fairy’s workload!

Fairy Mi had also taken over the responsibilities of the Whisper Fairy. That sensitive job involved whispering the answers to difficult year-end exam questions into children’s ears.

But, despite her speedy wings and clear enthusiasm, that spring she simply could not keep up. After a time, not even her oatstraw tea could lull her into a few much-needed hours of rest. This led to many sleepless nights. Her enthusiasm was waning – a definite problem for a fairy. So she decided to take things in hand. She foraged the underside of a lime tree and she picked gingergrass – a plant known for inducing a feeling of wellbeing. Then she mixed them with her favourite oil, ylang-ylang, an aphrodisiac with the lesser-known property of promoting restful sleep. The results of her concoction were so convincing that she decided that it would be her wedding gift to the Fairy Queen and Elven King.

Fairy Mi was soon reaping the rewards or her ingenuity. In recognition of her role in improving their quality of life, the royal couple gave her permission to hang up her wand and rechristened her Fairy Soapmaker.

And dear reader, when was the last time you noticed her in our workshop?