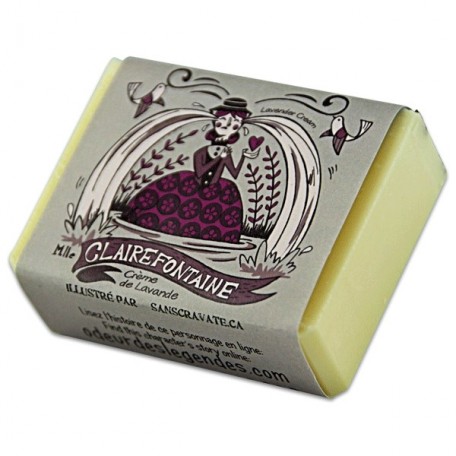 This soap from Savonnerie des Diligences carry you away with its sweet lavender scent!
This soap is suitable for all skin and acts as soothing lavender oil for the mind and for sensitive and reactive skin.
Soap cream 3 in 1 ideal: body, face and hair!
100g

Claire Fontaine came into this world in 1740, before Bolton Township was legally incorporated. At the time, the fastest way to the main road was by river, south down the Missisquoi Valley.

The daughter of a farming family who was bestowed with unshakable determination, Claire was the only of seven children to learn to write. She wrote to her suitor, Louis Beauregard, recalling their embrace in the lavender field. Knowing that no one could read their correspondence, she spared almost none of the saucy details. Burning with desire, Louis soon made his move. Just before mass on Christmas Eve, he asked Claire’s father for her hand in marriage. They were to be wed in the summer of 1759.

But no one knew that the English would land at Québec that spring. To the anguish of the two lovers, all strapping young men were called up to the front to save New France. With a fiery parting kiss, he promised Claire a swift return so they could be married. Leaving behind his betrothed and Bolton Township, Louis travelled down the Missisquoi River on the start of the long journey to Québec.

When the lavender came into flower, Claire obsessively made scores of tiny fragrant bouquets. She put lavender sprigs into a small pouch to carry in the pocket of her apron so that she could breathe in the calming perfume all day long. Every evening after her chores, she hurried to her rock, the highest in the township, to wait for a glimpse of her handsome Louis. Winter came and the river froze over, and even if Claire had little hope of seeing her lover return on foot, on warm days, she took up her post on her rock.

With the snowmelt, the river abruptly swelled, causing a landslide that created a waterfall as majestic as it was deadly. Claire never returned from her rock. People say that when the lavender flowered that year, the falls gave off such a strong smell of lavender that villagers used its waters as an essential oil. Claire’s family erected a small cross flory of lavender to commemorate her love, now eternal.