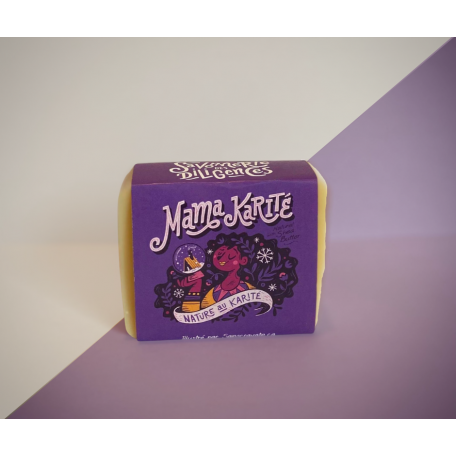 The light shea scent of Mama Africa soap from the Savonnerie des Diligences will take you far away.
Its 50% shea base, without any added essential oils, is ideal for sensitive, irritated and babies' skin, which flourish under the soothing and softening effect of this soap.
The foam is creamy, rich and velvety... A true caress.
Your skin is so sensitive that it tolerates almost nothing? Mama Africa is for you!
The shea butter hardens the soap bar, which extends its use duration.
100g
Ingredients:
Fairtrade Shea Butter, Oils (olive, organic coconut, beeswax), water, sodium hydroxide.
Made in Quebec

Mama Africa or The Secret Beauty

Some people dare to dream of a better life despite the uncertainty and pitfalls along the way. Euphrasie Mougalinda was one such person. Very young, she resolved to get an education and become a writer. Her mother, who slaved away making shea butter in the village of Sissili, always encouraged her.

Every night before bed, though exhausted, Mama Africa always took time to massage nutty-smelling shea butter into her children’s skin to keep their feet from cracking and developing fissures that could lead to dangerous or even deadly infections. It had to be done at night since road dust would stick to their legs if it was applied in the morning.

Euphrasie attended classes three days a week at the school in the next village, learning to read and write and devouring the books in its tiny library. In 1974, she turned 21 and was accepted to attend university in Ouagadougou. As the only woman in the small class of twelve literature students, she beamed with pride.

The university was in its first year of operation and qualified teachers were scare in Mali. That is how Jean-Pierre Desforges, a young Quebecer from Compton, Quebec who was excited by the adventure of teaching poetry in a foreign land came to stand before Euphrasie's class. They fell in love at first sight. Three years later, she did not hesitate to follow Jean-Pierre back to his cold native land.

To her great surprise, in her African eyes Québec was a very exotic locale! With its four successive seasons and their distinct landscapes and the winter snows she found so very hard to describe in letters to her parents, her entire life was like a romance novel, from her loving Jean-Pierre to her frigid adoptive land.
She religiously kept the daily ritual her Mama Africa had instilled in her, waiting for the butter to soften in her palm before lovingly working it in. She had been warned that the cold land would change her skin, but season after season, despite wind gusts and abrupt temperature changes, her skin was always healthy and silky smooth. The entire village envied her natural beauty – all without makeup! Euphrasie knew nothing of makeup. For her, beauty and simplicity went hand-in-hand. That simplicity and her natural generosity led her to share her beauty secret. And her secret spread as surely as shea butter over skin dried and cracked by the Québec winter.

So every time you treat your skin to shea butter, give a little thanks to Mama Africa!

Thank you to B., whose story inspired the legend of Mama Africa.